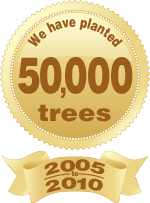 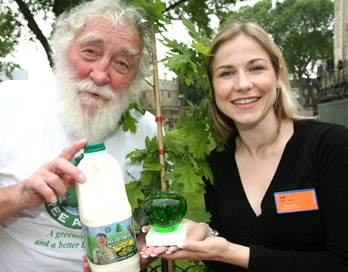 David Bellamy and Sainsbury's Liz Birch with their Green Apple Award at the Tower of London.

Sainsbury’s has become the first company to plant 50,000 trees through Tree Appeal and at a ceremony held at the Tower of London on June 2nd 2008, was presented with the prestigious Green Apple award by Professor David Bellamy.

Sainsbury’s began to plant trees in 2005 through their exclusive support of White & Wild Organic Milk, which pledges one native, broad-leafed tree for every 20 two-litre bottles sold.

Tree appeal’s patron, Professor David Bellamy, offered his congratulations, "Just to put things into perspective" he said, "Sainsbury’s trees have been planted across the UK, in places such as parks, nature reserves and schools. If they were all put together, these trees would cover the equivalent of around 45 full sized football pitches or 170 tennis courts!" 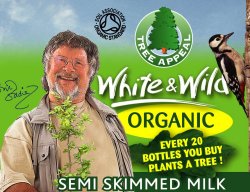 "Sainsbury’s are proud of the achievement of planting 50,000 trees by supporting White an Wild organic milk. It is great to make such a significant and long-term contribution to our environment. With the continued support of our customers, we look forward to hitting even greater tree planting targets in the future" stated Alison Austin, Sainsbury’s head of environment.

Bill Oddie, the ‘face’ of White and Wild added: " A very big ‘well done’ to Sainsbury’s for having the bottle to plant an incredible 50,000 trees, And well done Sainsbury’s customers for buying the White & Wild milk. These trees will provide much needed homes for many hundreds of my feathered friends for centuries to come - not to mention all the insects and mammals. I toast you all on UN World Environment Day with an extra large glass of White & Wild Organic milk!"

Sainsbury's plant a tree for every twenty 2 litre bottles of White & Wild sold.

Recent years have seen a dramatic decline in farmland wildlife from birds, mammals, insects and flowers. This decline has been partly attributed to farming intensification including the use of pesticides. However the following practices are helping to reverse this decline and ecologists believes that organic farming systems benefit the environment:

White & Wild Farmers are members of OMSCo Organic Milk Cooperative, who have committed to wildlife friendly organic farming practices laid down by the Soil Association. For every twenty 2 litre bottles of White & Wild you buy, Tree Appeal will plant a broad-leaved tree in your area reducing your carbon footprint and creating space for wildlife. Organic farmers do not use artificial fertilisers, insecticides or fungicides, and have also adopted a range of other practices which benefit wildlife.