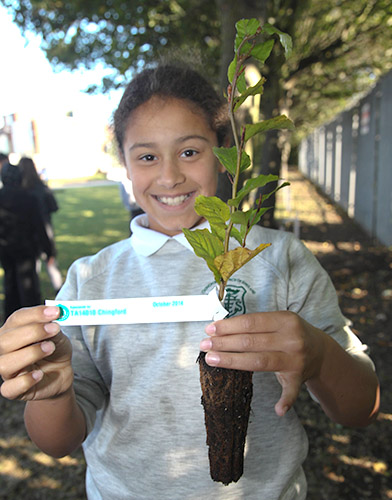 Tree Appeal provides saplings to locations throughout the UK, the majority of which are schools. They are paid for entirely by our sponsors - there is no cost to the recipients. We only supply native broadleaf species which are grown locally from hand-collected seed. Traditionally the tree planting season is from November to March, when the trees are dormant, but because we use cell-grown saplings we can effectively extend the season by a month or so.

Cell grown plants are grown in small containers (cells) to prevent root spiralling and to promote fibrous growth of the root system, which are all key to the future survival of the plant. Seeds are sown into compost filled multi-celled trays and the grown saplings come with a plug of compost around the root ball. Although cell grown plants can be smaller than their bare root counterparts they establish much faster and will often catch up or outgrow bare root stock.

Cell grown plants also have the great advantage of being planted out when not dormant, allowing for an extended planting season. They are also really easy to plant.

What species are available?

At some times of the year, especially towards the end of the planting season, we may run short of some species but we try to make as many available as possible.

For the remainder of the 2021/2022 season we have the following species available:

We will of course be fully restocked for the autumn.

How big are the saplings?

The saplings are cell-grown whips which means they are a year old and are between 0.3m and 0.6m in height, depending on the species.

Read about how to apply for some free trees.